South Africa is located at the southern tip of the African continent. It is a country almost 3.5 time as large as Germany and divided in 9 provinces.

South Africa recognizes 11 official languages, among them English (commonly used language in tourism and trade) and Afrikaans (originated mainly from Dutch). Due to its multiethnic society the country is often referred to as the Rainbow Nation.

The currency in South Africa is Rand and Cents (ZAR).

South Africa is considered as an upper-middle-income economy or “take off country” and offers the tourist great infrastructure and unforgettable landscape and scenery.

Being in the southern hemisphere it shows the exact opposite seasons to Europe, meaning South Africans celebrate Christmas and New Year in their summer holidays. The climate in a nutshell is Mediterranean in the Cape, moderate in the interiors and subtropical in KwaZulu Natal right up to the Kruger Park. Thanks to a (very) fair share of sunshine during the entire year (it is even more than on the Canary Islands!), the travel period to the Cape is year round, but in our view the best months are September to November and February to April.

South Africa offers a wealth of varied and stunningly beautiful holiday destinations like the vibrant city and surroundings of Cape Town, the lush green stretch of coastline along the Garden Route, the arid and spacious Karoo, the impressive Drakensberg Mountains and safaris in the vast Kruger Park and many other exciting game reserves.

Self-Driving is very popular in South Africa and the roads and signage is very good throughout the most of the country. Traffic is often minimal once you are out of cities and its surroundings.

We use the personalized and reliable services of Around About Cars for car hire, a leading car rental company offering some of the best rates in the industry in Cape Town and throughout the country and generally offering unlimited kilometers with no excess.

We often use the term “sunny South Africa” and indeed it is! Plenty of sunshine throughout the year and comparatively low annual rainfall – this and the fact that we have summer during the European winter draws a lot of visitors to the country!

Due to the size of South Africa and its geography, climate and weather varies within the country. In a nutshell:

Cape Town, Garden Route and Eastern Cape
A typically Mediterranean climate! Warm dry windy summers with little rainfall and wet, cool (but relatively mild) winters with delightful crisp sunny days in between. Snowfall occurs only occasionally inland on the mountaintops October and November are nice months and especially February to April too, when the southeasterly wind does not blow as strong anymore. The West Coast displays its spectacular wildflowers usually in August/September and the whales visit South Africa normally between July and November.

Johannesburg, Kruger- and Madikwe
Winter tends to be sunny, crisp and clear, partly with frost and very bracing early mornings but pleasant day temperatures. Summertime brings warm and wind free days with balmy nights and brief thundershowers most afternoons; the rain refreshes and cools down without bringing a chill.

Durban and KwaZulu-Natal
On the coast hot, wet, humid summers and mild to warm dry winter with occasional rain; Durban smiles at 320 days of sunshine a year, and KZN – as we call it here – boasts endless golden beaches with warm sea temperatures (even in winter they rarely drop below 17 degrees). 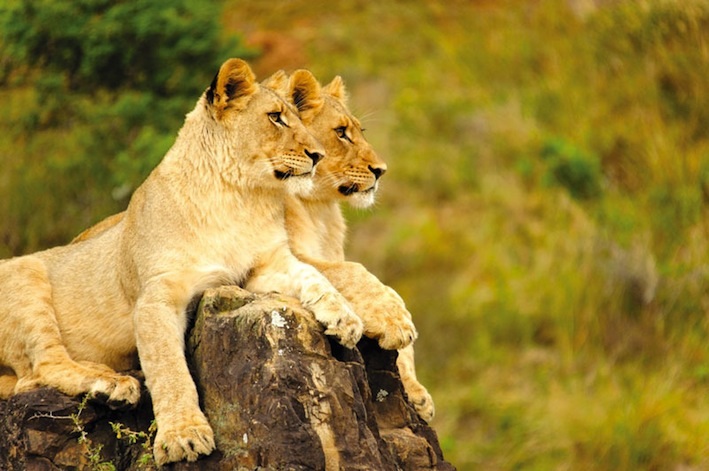